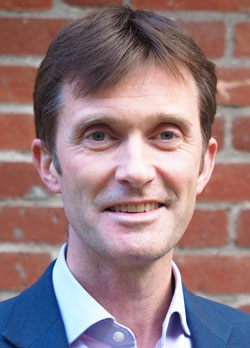 Mr Declan Costello is a highly experienced consultant laryngologist with extensive expertise in treating all aspects of voice disorders and hoarseness – from vocal cord nodules and cysts to polyps, papilloma, vocal cord paralysis and spasmodic dysphonia.

As a singer himself, he has a particular interest in treating voice disorders in performers. He is also one of the leading exponents of local anaesthetic laryngeal procedures, which can be particularly beneficial for patients with vocal fold paralysis.

He regularly runs workshops for singers and performers on voice health and anatomy.

Mr Costello studied music at St John's College, Cambridge, where he was a choral scholar under Christopher Robinson. He went on to study medicine at Imperial College and undertook his ENT specialist training in the Oxford region.

He was appointed as a consultant ENT surgeon (specialising in voice disorders) at the Queen Elizabeth Hospital in Birmingham in August 2010. In December 2018 his NHS practice moved to Wexham Park Hospital in Berkshire.

Amongst his non-clinical duties, he is the editor of ENT & Audiology News magazine. He continues to sing regularly with a number of different groups.

The coronavirus pandemic has had catastrophic impact on the performing arts: early in the pandemic, singing was implicated as a “high-risk” activity for spreading the virus. In the space of a few weeks in June-August 2020, Mr Costello and a team of researchers examined the extent of aerosol production by singers. The experiments generated a huge amount of media interest (for example, here in The Guardian). The results (the final published version of the paper is here) were widely reported in the media – BBC News Health, The Guardian, The Independent, The Telegraph, Classic FM, Reuters UK, The Stage, DJ Mag, Rolling Stone Brazil, NME, BBC Radio 4, BBC Radio 6 Music, BBC Radio 5 Live, BBC World Service Radio, Yahoo! news, Daily Mail, NY Times Post, The Sun, New York Times, Fox 5 NY. As a result of the experimental data (and data from the SOBADRA study), the UK government allowed singing (both professional and amateur) to re-start in mid-August 2020. Further research is planned.